Boys are Stupid, Throw Rocks at Them. 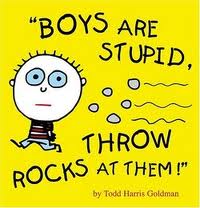 Boys are stupid and quite possibly deserve rocks thrown at them. Were boys this stupid 30 years ago? Probably. Oh who's kidding who, of course they were.

I feel so deeply for my child having to navigate the world of dating. My beautiful, intelligent, artful, sensitive, witty child had the fortune or misfortune of two prom dates this year. Two very different young men and two different schools.

The first boy, Dave calls him Steven, asked her via a German word puzzle given to her in class. I think the teacher was in on the plan. Clever batman. He is a classmate. Was an acquaintance, really. She had already planned to go to prom date-free with a gang. After all, no need to waste time waiting for a boy to get up the nerve to ask. The dress was already purchased. It was not a romantic endeavor.  He is really very smart. Was part of a group that designed and competed with robots that play basket ball. Going into robotics engineering for college. He is one of those classic "geeky" boys. He has lovely blue eyes hidden behind glasses and truly a "purdy mouth." The kinky curly hair is not so great, but if he keeps it short, it looks alright.

The second boy, Dave calls him Steven, goes to a different high school but they went to elementary together and I hear my girl used to beat him up on the playground.  He asked her by spelling p-r-o-m in his french fries while his wing-man distracted her with a game of pool at a sports bar.  Was with a group of boys watching the March Madness basket ball finals. Her father and I had been telling her for a month or more that Steven was going to ask her to prom. She didn't believe us, insisting that he just came over to watch TV with her when he was bored. At that time, Steven Two knew about Steven One, but not the reverse. In her mind, this was not a romantic endeavor either due to her discussions with Steven Two. Steven Two is a classic jock. He swims year round, competes in triathlons, works out hours every day. He wants to be a Navy Seal. He is smart; not typical of a jock. He is also a temperamental, moody little PMS-er at times. He is a self proclaimed "ass" which was rather endearing to me. As my girl describes him, ""Your ego is so big that there's no room for your self esteem". So yeah, big ego and no self esteem. Actually kinda cute with the big old studly jock persona and this shy "I'm fat" thought pattern underneath. Did I mention he is hot? Or as we said thirty years ago, a fox.

I somehow managed to raise my daughter with a bit of a conscience and empathy. She didn't want to "date" both of them at the same time. The pressure these days to click the "relationship" box on FB is huge. I explained that she did not have to choose.  However, somewhere along the line Steven Two asked her to be exclusive; even though he knew that prom with Steven One had yet to happen. She told him, in consideration of Steven One, she couldn't be exclusive until after his prom. Of course, Steven One asked her to be exclusive too. By this point, she liked Steven One because of their commonalities, but had come to the conclusion that there was no romantic interest, so she declined. She had also decided that there really was some chemistry with Stephen Two.

Forward a month.  Steven One is like the "tide" according to Dave. Will always be there, taking his time, slowly wearing away at the shore along with the phases of the moon. Wearing her down and not giving up. He's getting better looking to me as time goes on. Spent some time with the two of them together last week. I have to say, I'm not fond of their conversations. All the racist bigotry sexual crap that passes as humor between them, kinda made me sad. I thought I had instilled better ... better into her. So a little less impressed with him, as I don't see them enhancing each others best qualities, but inflaming their worst. Just not respectful (we hate that word in our house because of its misuse as in this case) with each other.

Steven Two has been MIA except for one night that she went out with his mom and some friends to bowl. MIA. Thought it was because of his triathlon participation/training and her full AP exam schedule. Turns out, the studly virginal jock who is too shy or macho to even KISS the girl has moved on because of course, he wanted a little more action than he was going to get. Dumb Ass thinks he's going to get a blow job or sex when he can't even initiate a kiss?  C'est la vie, been preparing her since she was three for that kind of pig.

What really lights my fire, is how navigating the world of stupid boys affects my girl. She is sad about the whole situation and especially Steven Two's lack of gonads to even talk to her. The inability of boys these days to have a conversation face to face with a girl regarding their "relationship" status is incredible. Why don't boys have any ability at all to be honest and forthright? I know my daughter is because I gave her that example; good and bad depending on your perspective.

Boys are stupid, throw rocks at them.


(So this is really my first attempt. Was more a rant, as I expect most of my blogs to be. Also too long and wordy, I suspect. Will try to get better with that. Comment to help me improve.)

Whit
Opinions from an opinionated, passionate, annoying, COH who may be emptying the nest but still thinks she's 20 something.